Do you think that your automated trading system is ready to go live on a real money account? Whether you have purchased the auto-trader or built one out with your own ideas, the transition between simulated to live trading can be and is often done prematurely. Without the confidence of proper and thorough system testing and configuration, this can become a very costly mistake as your system does not perform how you may have expected it to. Those reasons could include but are not limited to: parameter curve fitting, excessive intra-trade drawdowns, unrealistic execution fills, signal to execution discrepancies, platform infrastructure instability, underrepresenting slippage/commissions or trade logic impossibilities.

Lucrum consulting services cover a wide range of best practices to reduce variables and define expectations for your automated trading system. Have an unbiased professional perform the proper due diligence to give you the confidence before taking more risk than you need to.

Before a trading system becomes reality, it starts as a simple idea that is formulated through human observations in technical charting behavior to establish objectable patterns for exploitation of price prediction. Once the idea of implied truths becomes established, the next step is to develop a program which is capable of emulating the logic of the system to be tested and confirm validity against historical data. Based on the results of the preliminary testing would one confirm whether or not the system is plausible to be profitable.

System theory consulting skips the development step which will save both time and money by conveying the logic of the system to an industry professional who will be able to decipher the likelihood that this system consists of components that would prove the assumption of profitability. After the years of experience in the automated trading industry, there are far more systems developed that don’t work and could have been identified as prone to failure prior to an often lengthy and costly development.

Our goal is to give a level of certainty or caution with the ideas you have for your system before you spend the time and money to develop the program. If the system theory is not sound, we will provide insight as to why we feel that way and offer utmost support to improve the system logic when able.

The system improvement consulting service consists of taking an existing trading system and determining which factors can be manipulated, added or removed in order to achieve a desired performance metric increase. By bringing on an additional set of minds may shed light to a concept that you may have not thought of.

System improvement goes beyond showing good historical profitability but to further increase the robustness of the system and work on consistency of performance. Other improvements would include execution optimization, historical drawdown reduction, trade expectancy improvements and risk/reward ratio optimization.

Backtesting or simulated performance testing generates a lot of hindsight and sometimes unrealistic expectations in comparison to live trading conditions. Both curve fit bias and order fill expectations are likely to vary between simulated and live trading to a point which could turn a generally profitable system into a non-performing system with elevated levels of loss or risk metrics.

Our system testing services provides an unbiased third party to analyze the inherent performance aspects of your system while remaining objectified to possibilities for alterations to performance given live trading conditions.

Curve fitting is the greatest downfall for many once promising systems. When testing against any historical data, there are many factors which can lead to unrealistic performance results due to fitting the tested data to the logic and parameters of the system. Even the most basic of systems can show high levels of profitability if curve fit but will ultimately lead to ruin as market conditions continue to change to historically unseen levels.

Optimizing any system needs to be done carefully and methodically to avoid the pitfalls of overfitting any system to the historical data. Our tools allow us to check for overall robustness of system logic given a series of both historical and simulated chart data. 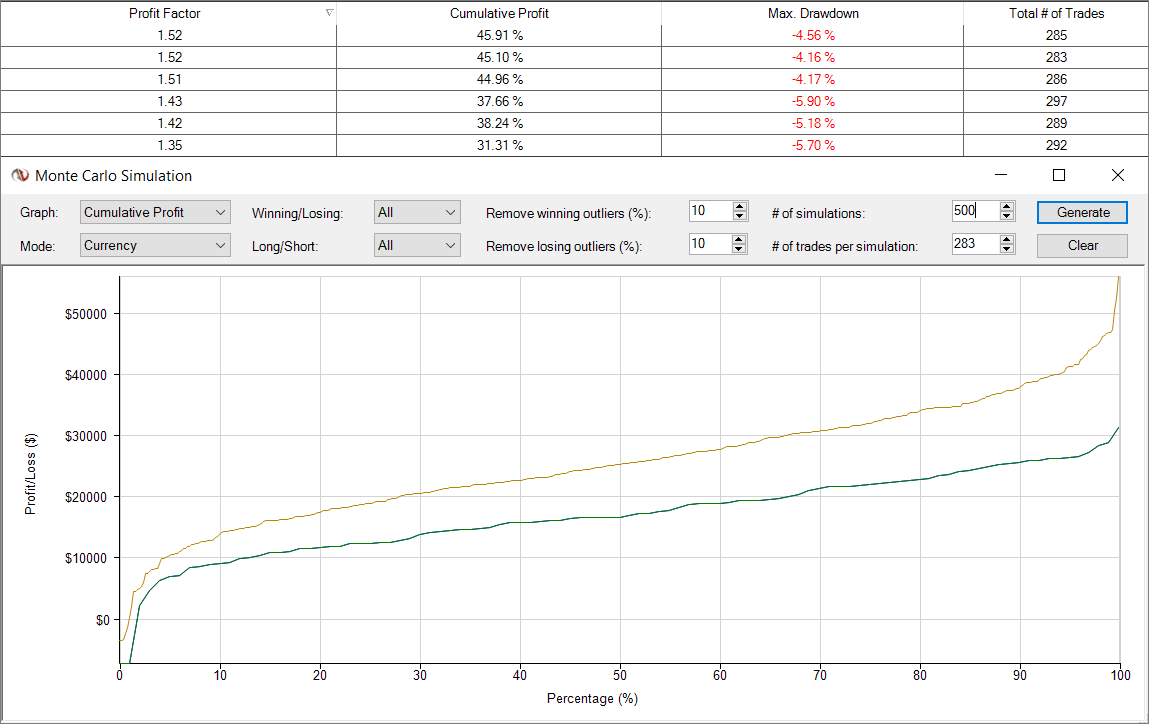 U.S. Government Required Disclaimer - Commodity Futures Trading Commission Futures and Options trading has large potential rewards, but also large potential risk. You must be aware of the risks and be willing to accept them in order to invest in the futures and options markets. Don't trade with money you can't afford to lose. This, and all other information on our website, is neither a solicitation nor an offer to Buy/Sell futures or options. No representation is being made that any account will or is likely to achieve profits or losses similar to those discussed on this web site. The past performance of any trading system or methodology is not necessarily indicative of future results.

CFTC RULE 4.41 - HYPOTHETICAL OR SIMULATED PERFORMANCE RESULTS HAVE CERTAIN LIMITATIONS. UNLIKE AN ACTUAL PERFORMANCE RECORD, SIMULATED RESULTS DO NOT REPRESENT ACTUAL TRADING. ALSO, SINCE THE TRADES HAVE NOT BEEN EXECUTED, THE RESULTS MAY HAVE UNDER-OR-OVER COMPENSATED FOR THE IMPACT, IF ANY, OF CERTAIN MARKET FACTORS, SUCH AS LACK OF LIQUIDITY. SIMULATED TRADING PROGRAMS IN GENERAL ARE ALSO SUBJECT TO THE FACT THAT THEY ARE DESIGNED WITH THE BENEFIT OF HINDSIGHT. NO REPRESENTATION IS BEING MADE THAT ANY ACCOUNT WILL OR IS LIKELY TO ACHIEVE PROFIT OR LOSSES SIMILAR TO THOSE SHOWN.